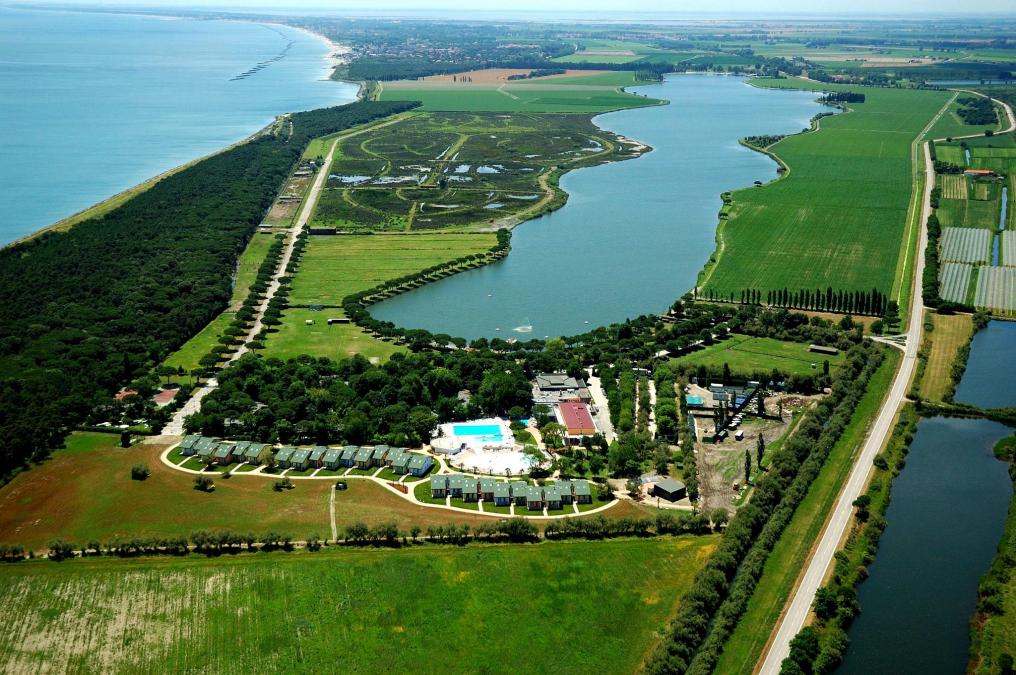 Hotel & Residence where relax and fun are connected to present you one magic holiday. Private lake, sea, pool, entertainment, restaurants, activity all for all inclusive service. Hotel pet friendly with special service. 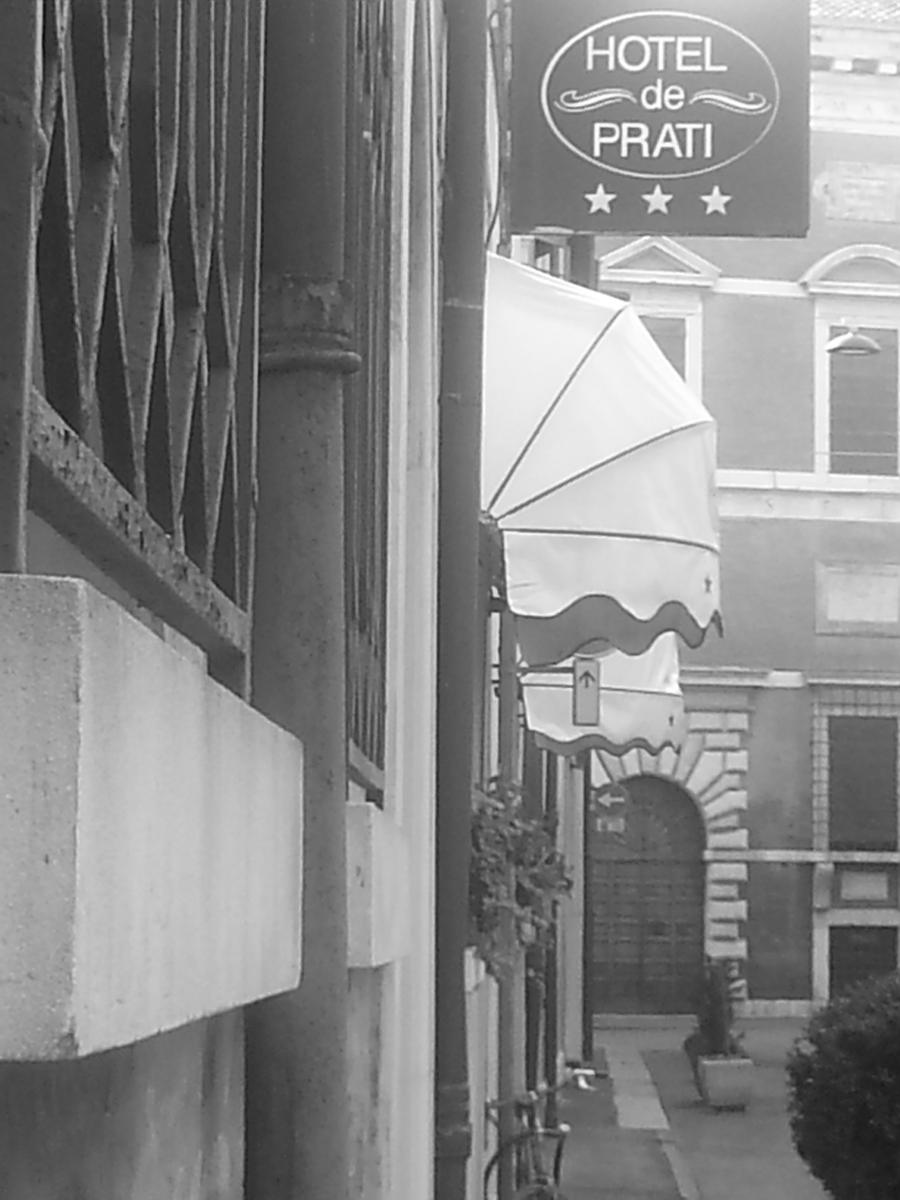 Small, charming , family-run hotel, set in the old town centre. It has 15 rooms, 1 suite with terrace and 1 flat in dependence. In our spaces technology, vintage furniture and art coexist. In the breakfast buffet you can find sweet and savory products. Wi-fi free. 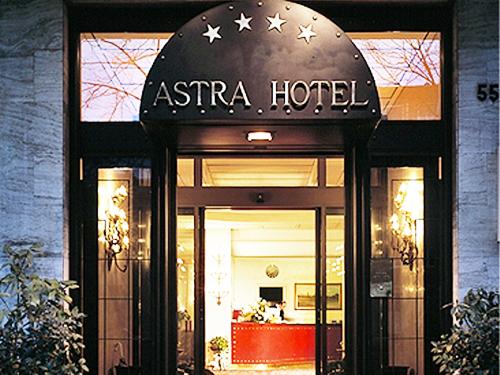 Easy to reach by train or car and close to the Estense Castle in the heart of the city, the Astra Hotel offer 69 rooms elegantly furnished. The grand lobby, private garage, the cozy bar and fine restaurant will be at your disposal to provide a comfortable stay in Ferrara. 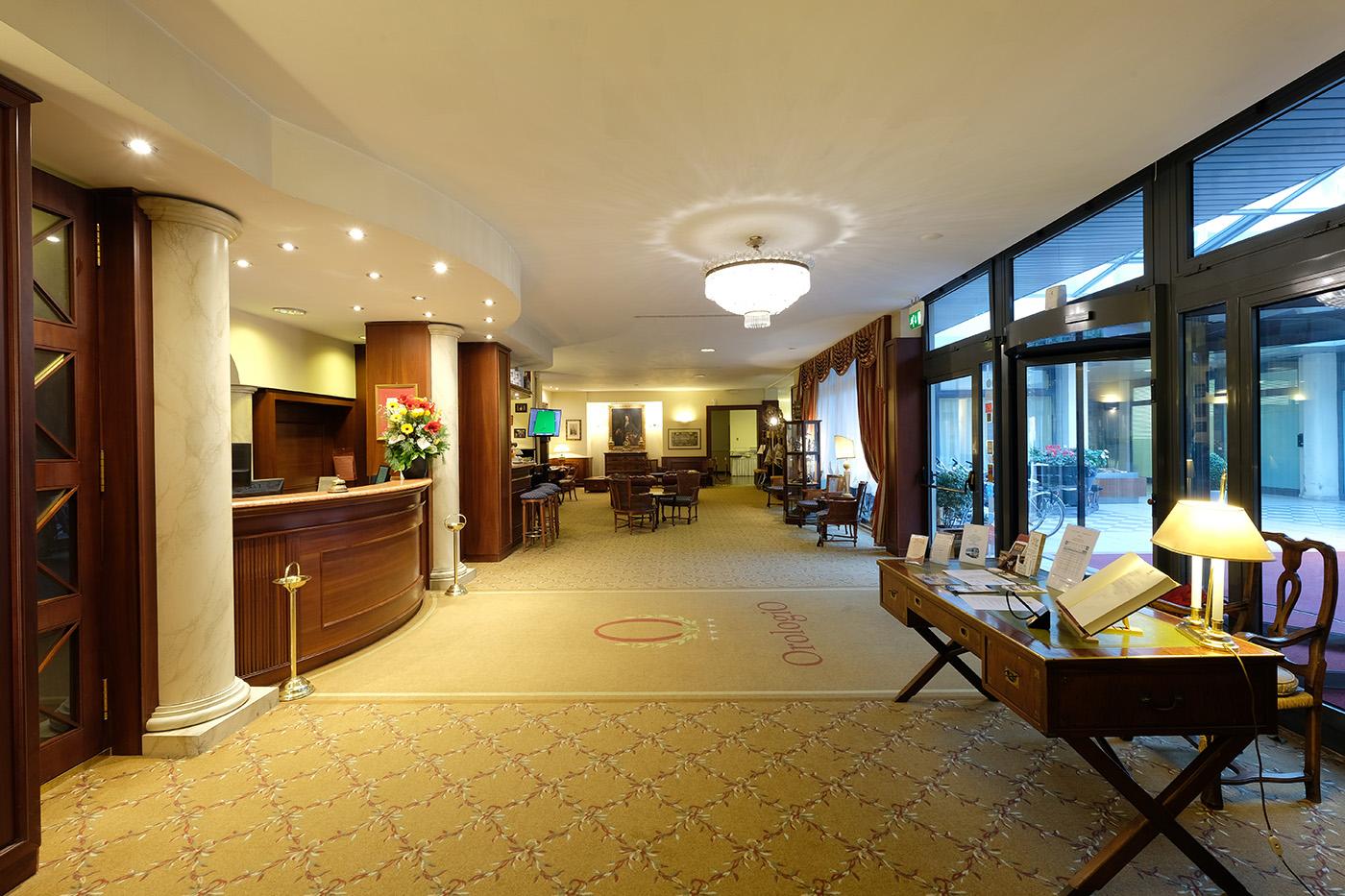 The Hotel Orologio in Ferrara located along the circle of the ancient walls and close to the tourist landing along a branch of the river PO, is easy to access from the highway, a few hundred meters from the train station and the old town, to reach which you have Free of charge available for the newest bicycles. It offers comfort and prestige internationally. All this thanks to a careful and refined design and to an exclusive, attentive and professional service. A warm welcome and a nice courtesy will make you company.The Hotel Orologio in Ferrara guarantees quality of comfort and service, the atmosphere that is breathed in this new and shiny hotel has the taste of good memory. The warm welcome of our rooms. The comfort of our "qeen-SIZE" beds, the spacious rooms, the private terraces and our fabulous breakfast, are the requirements for gaining esteem and sympathy.The rooms of the Hotel Orologio in Ferrara are equipped with the most modern comforts, air conditioning, large colour TV, mini bar and private safe. The 46 rooms are divided by classes, each of which will adapt to your needs. There is the Comfort, the Executive, the Junior suite and the suite. The Hotel Orologio, offers to the companies a preferential rate valid all the year for the individual stays of its customers and collaborators. 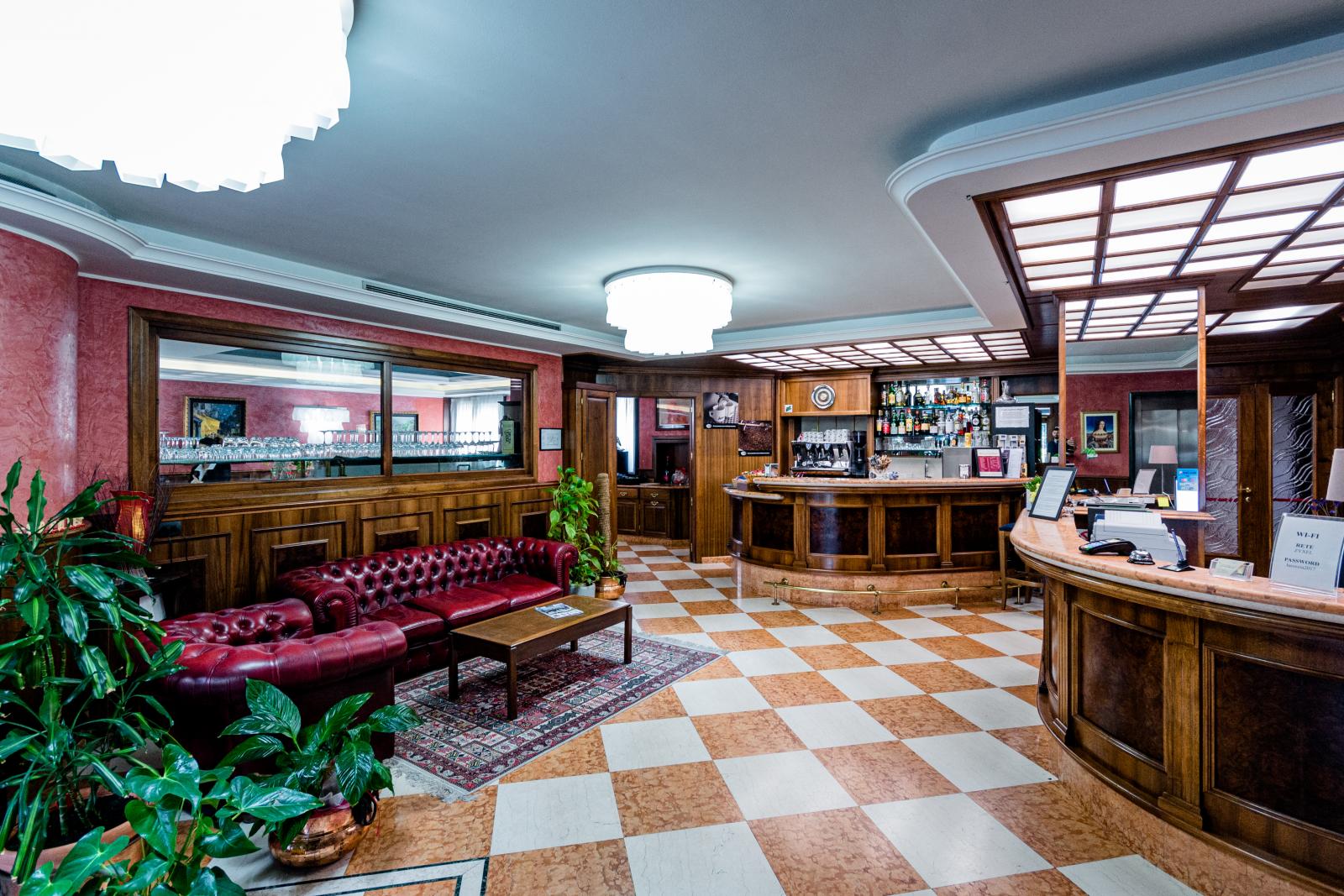 Hotel Lucrezia Borgia Via Andrea Franchi Bononi 34 - Ferrara Phone +390532909033
We are a 3-star, family-run hotel, surrounded by a beautiful park of 4,000 square metres, with great attention to sustainability. Located in the southern part of the city just 3 km from the centre of Ferrara, strategically away from the chaos, near the Il Castello Shopping Centre and close to many of Ferrara's facilities, including Ferrara Fiere, the Palasport, the Palaghiaccio and the Beethoven Swimming Pool. We have 52 rooms, both Standard and Deluxe with King Size beds, all furnished in classic style. 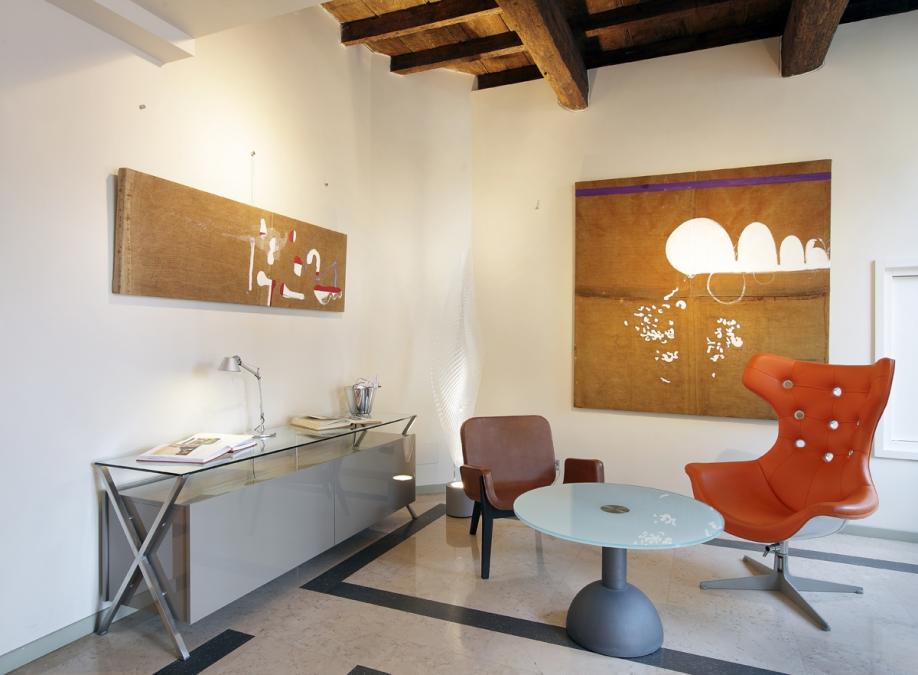 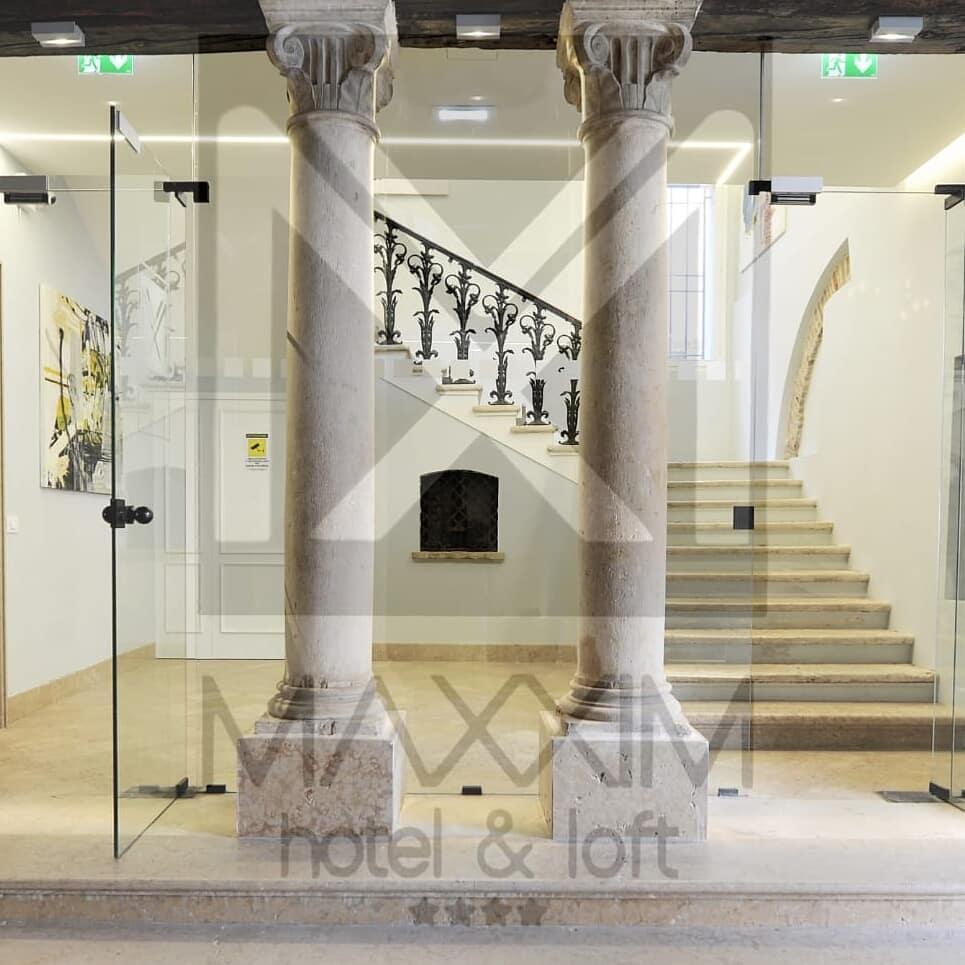 Maxxim hotel & loft is situated among the oldest and the most prestigious legacy of the Este family, Beccari- Freguglia palace, which belonged to the Earls from the XV century. After the resauration ended in 2018, the palace has turned into an hotel which mantains some carachteristics of the romantic period mixed with a more modern look. The perfect mix between history and modernity. 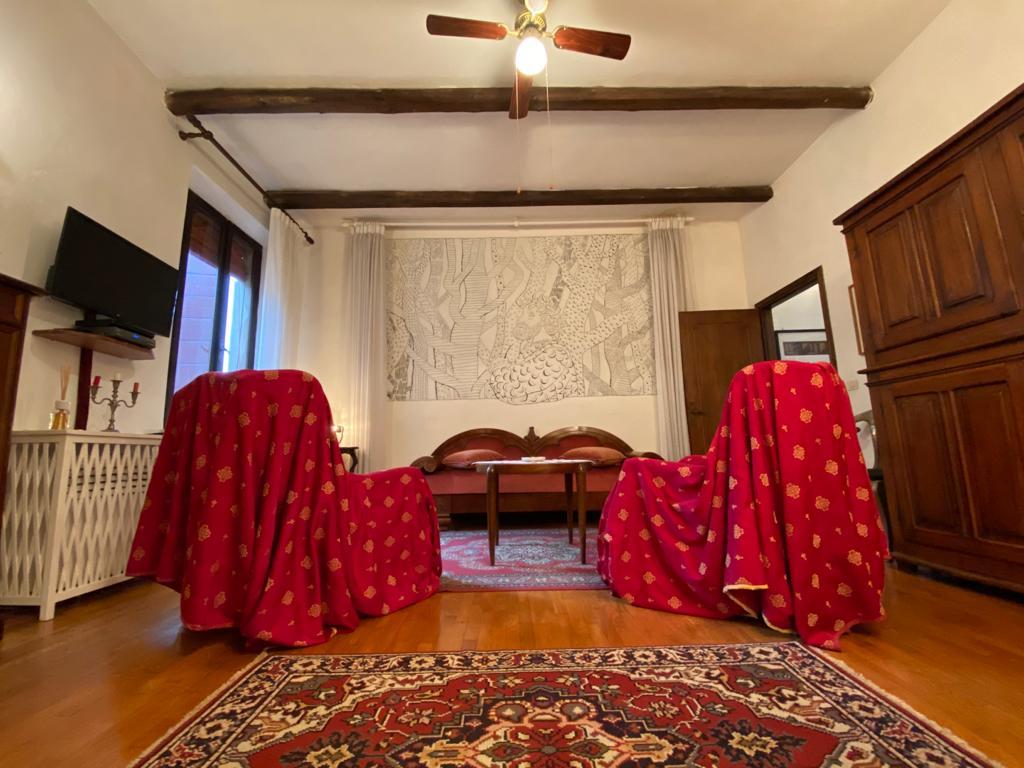 Built in the medieval period nearby the church of Santa Maria delle Bocche, in 1471 the palace passed from the notary public Rinaldo Mezzaprile do the Ariosto family, along with the adjoining building (the Magna Domus of the distinguished family), to which is linked by a bridge in vicolo del Granchio. In 1481 the building passed to the canon Brunoro Ariosto: the Christological monogram placed in the façade dates probably back to this period, in memory of the preaching of Bernardino da Siena in Ferrara, who adopted it as his emblem. The marble portal with archivolt and key bracket can be dated back to the sixteenth century While Brunoro was canon in Rovigo, his brother Nicolò established himself in the palace, of whom the world-famous Ludovico was born, at the time ten years-old. In this building, the author-to be of the Orlando Furioso studied with his tutor, Domenico Catabena from Argenta, and in all likelihood he wrote his first poems and few premature theatrical texts. When his father died, the great poet left Ferrara in order to go to Canossa as castellan of the Fortress, although he returned to live inthese rooms several times, until when he bought the house in the quarter of Mirasole. In the house situated in via Del Giuoco del Pallone 31, of which he later became the only owner, Ludovico wrote long passages of the first draft of the Orlando Furioso, published in 1516. After the Ariostos, the palace passed to the noble family Canani and then to the Federicis, Righettis, Agnolettis, until it was bought by the landscape painter and art critic Ferdinando Ughi in the nineteenth century. He then sold it to the painter Oreste Buzzi in 1913, who had just came back from Brazil with considerable financial resources, after having also worked for the President of the Republic. Upon Buzzi’s death, in 1943, the son Ugo gave the house to the Cavallinis, parents of Bruno (Eleonora Cavallini’s father), Rina and Romana (mother of Mario, Giovanni, Bruno and Anna Verdi ). Rina Cavallini got married to Giuseppe Sgarbi and gave birth to Vittorio and Elisabetta Sgarbi. Of Renaissance taste is the front, exquisitely ornamental in the tradition of the Ferrara “terracotta.” The ancient portico on the ground floor was tamponed during the sixteenth century, while the façade was raised after Buzzi bought it according to his own plan, and he intelligently tried to keep the stylistic unity with the piano nobile and decorated it personally with fine tempera colours of late Art Nouveau and Art Deco taste, both on the ceilings and on the walls. At the time when Oreste Buzzi bought the house, there was a big room on the ground floor (beck then a wood and carbon shop) where, according to the tradition, Ludovico Ariosto staged his plays in front of his family, as a preview. 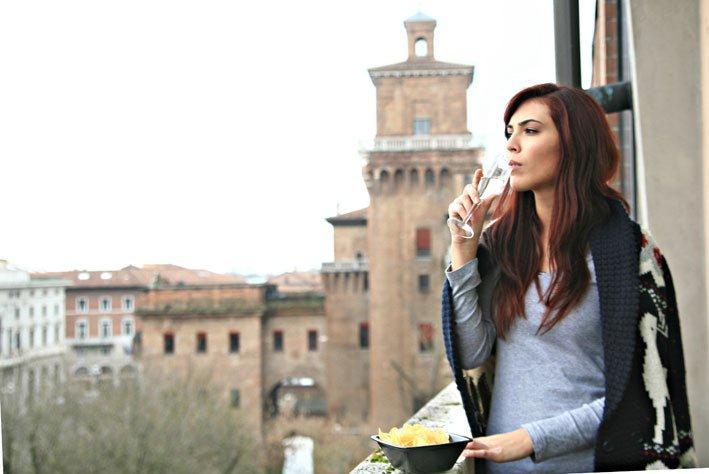 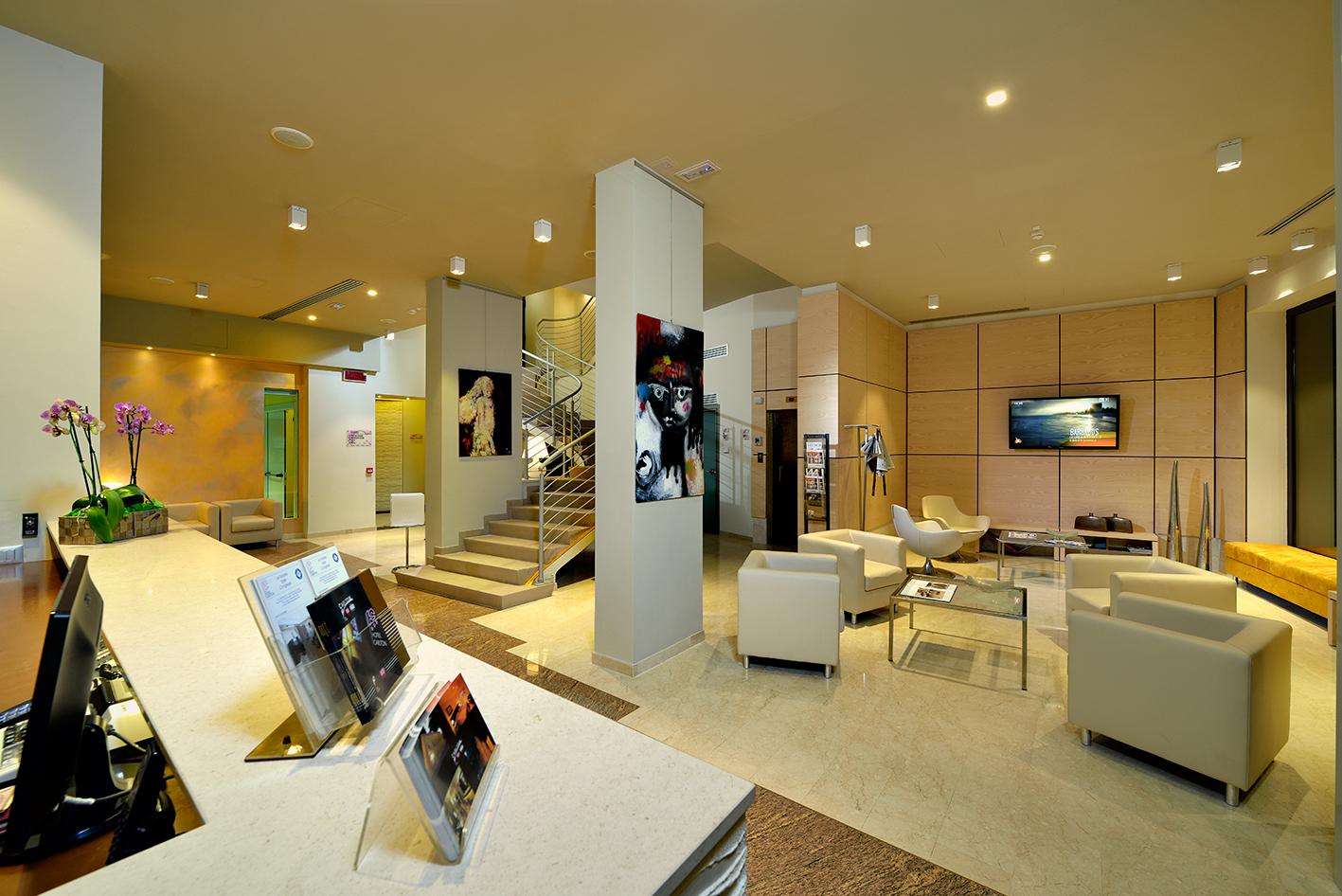 Situated in the heart of the Historical Centre, the Hotel Carlton is the ideal location for trips of both pleasure and business in the fascinating Estense city. Thanks to its fortunate position and with the option of using our own customized hotel bicycles, it is an ideal starting point for every itinerary. 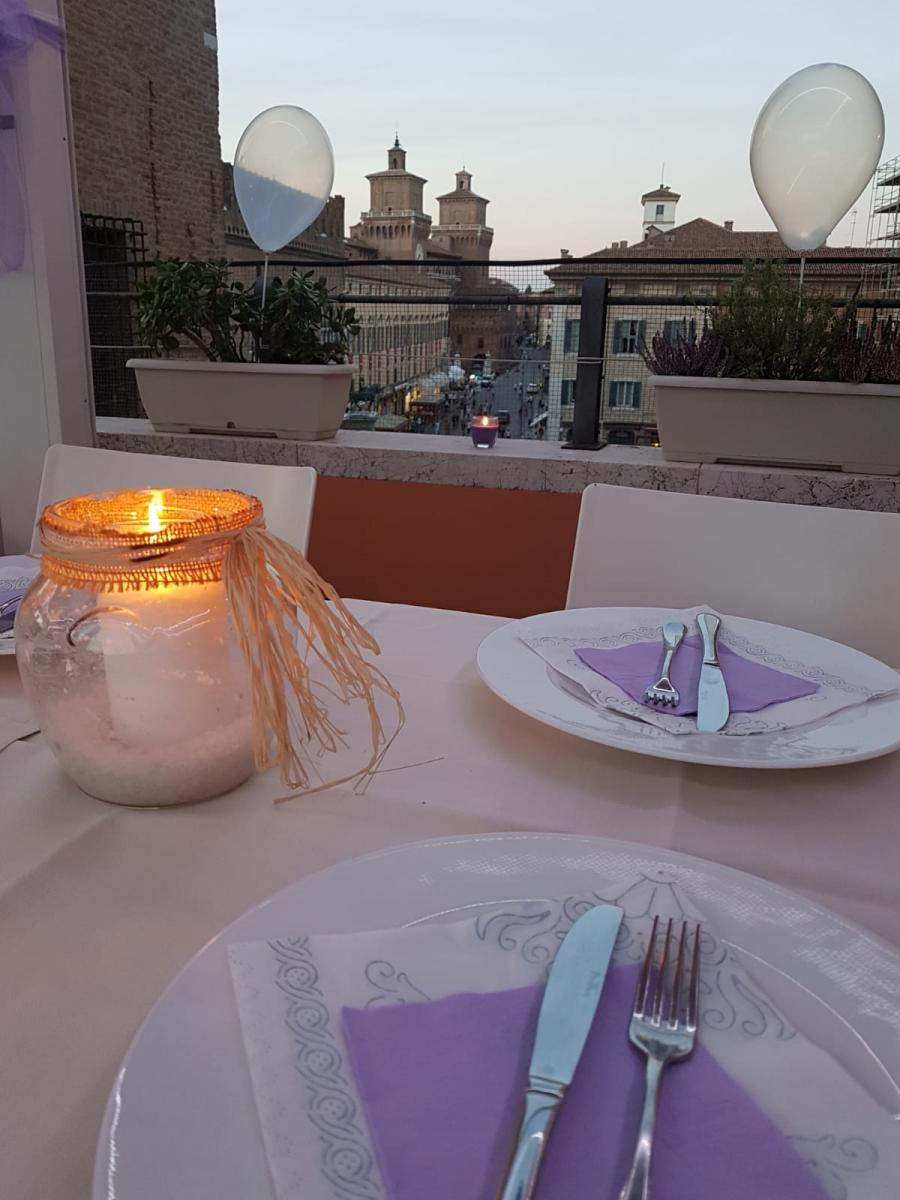 Hotel Torre della Vittoria Superior Corso Porta Reno, 17 44121 Ferrara - Ferrara Phone +390532769298
The 3 Star Superior Hotel Ferrara Torre della Vittoria 1928 has recently changed management, is located in a historic building in the heart of Ferrara just a few meters from the Estense Castle and the Duomo directly overlooking Piazza Trento and Trieste with breathtaking views from the hall breakfasts / restaurant both from the rooms.Torre della Vittoria Hotel Ferrara, whose rooms have been completely renovated and furnished in early 2014, consists of 10 Junior Suite double / twin rooms (3 of which with possibility of 3rd bed) of large size and luxuriously furnished, equipped of every comfort (from the Led 32 "TV with satellite channels, telephone, air conditioning and underfloor heating, minibar, hypoallergenic wool carpet), all with the possibility of a double bed or with 2 separate single beds, each room has a large bathroom with shower (in 6 of the 10 rooms there is a hydromassage shower).The 3-star Superior Hotel Torre della Vittoria located in the historic center of Ferrara, you can find space for your car in large paid parking at 300 meters from the hotel Why
book
with us?

and not with an intermediary?

Booking with us you can have access to unique deals and offers, not available elsewhere.

In addition, booking with us means helping the heritage of Ferrara as no commission is paid to intermediaries, enabling local operators to offer better services at the lowest prices.

We are a group of Hotels, Bed & Breakfast, Agriturismi and Travel agency who deeply love their city.

We will provide you a lot of tips about what to do and we will recommend you only the best restaurants..

We welcome people from all over the world and we love to let them discover the true and most original side of Ferrara.

Comacchio,
The nearby beach

Ferrara is not only Art, Culture, Food and Events.
Experience the wonderful naturalistic Po Delta Park. Visit the amazingly unique "Trepponti" and "Ponte degli Sbirri" Bridges. Have you ever eaten eels? Enjoy our typical eels dishes.

Want to find out The hidden side of Ferrara?